View source
⛨
It has been suggested that this article or section be merged with Owen Zastava Pitt. 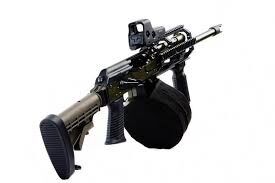 A select fire shotgun built from a Saiga 12. Milo gave the shotgun to Owen Pitt after the latter's Remington 870 was destroyed by a Vampire. When Owen asked "Exactly how many gun laws does this break?", Milo's response, after some thought, was "All of them."

Abomination has had its barrel shortened, a quad rail system replacing its fore-end, an under-barreled grenade launcher attached, and a silver-inlaid folding bayonet mounted on the side. It accepts both nine-round box and twenty-round drum magazines, as well as a variety of specialty munitions.

Community content is available under CC-BY-SA unless otherwise noted.
Advertisement